If you want to help me keep on writing this blog, please buy your new Nikon camera at the best price on Amazon using the link below.

The possibility of choosing an appropriate ISO sensitivity with the flick of a switch gives photographers a degree of freedom: you can maintain a fixed exposure level changing the ISO sensitivity and compensating with a corresponding aperture change or shutter speed change. It's so handy that I assigned the Fn button of my camera to ISO sensitivity, so that I can change it with just one click.

The good thing of this algorithm is its predictability: I turn Auto ISO on often and also made it part of a custom menu for easier access (although I'd really like to be able to assign a button to it).

The behaviour of the Auto ISO algorithm is consistent when using the camera pop-up flash in slow mode as well. Unfortunately, things are weirder when using a hot-shoe mounted flash, such as an SB-400. In this case, the camera increases the ISO sensitivity up to four times the value currently selected and won't raise it any more, even if you selected a greater maximum ISO.

Let's suppose you chose a value of 1600 ISO as maximum sensitivity and the current sensitivity is set to 100. When using a hot-shoe mounted flash, the camera will progressively increase the sensitivity up to four time the selected ISO, in this case 400, and will not increase it any more.

Once you learn it, it's something you can live with. In fact, I often manually increase the ISO sensitivity so as to increase the maximum sensitivity the camera will choose. Since I'm not often using sensitivities as high as 6400 ISO, that's just a couple of button clicks away.

However, since it's undocumented behaviour, I do consider that overriding the it Auto ISO settings is no good. After all we shoot manually, although with the help of partially automated task such as this, because we're supposed to know what we're doing.

Could I quickly switch Auto ISO on and off, I'd surely shoot with manual ISO when using an external flash. Unfortunately, the Nikon D5100 won't allow you to do this easily, the quickest way being customizing your own menu; but to be fair, the reduced control customization capabilities is by far the only complaint I have about the D5100.

As described in a later post, the 1.01 firmware seems to fix this undocumented "feature": the Auto ISO behaviour is the same when using either the pop-up flash or a hot-shoe mounted flash.
Posted by Enrico M. Crisostomo at 8/19/2011 10:53:00 AM No comments:

Atlassian JIRA v. 4.4 Has Been Released

Even though it's a "minor" upgrade it introduces a bunch of great new features, both for users, project administrators and JIRA administrators.


Installing and upgrading JIRA standalone has always been easy but the new installer and configuration wizard really make it trivial.

If you're going to perform a new JIRA installation, the installer now takes care of everything, including the creation of a dedicated JIRA user to the registration of JIRA as a service in the operating system. The new configuration wizard lets you configure the external database used by JIRA (are you using one, aren't you?) with a handy graphical user interface just during the installation phase. Now, manual configuration file editing and JIRA restarts are left to the geeky administrators.

If you're going to perform a JIRA update, something which is very common giving the pace at which Atlassian releases JIRA updates, life's never been so easy. The installer has an update option that takes care of everything, from the backup of your JIRA home directory to the migration of the most common settings (such as web server configuration and database configuration).


If users of a single JIRA instance of yours are scattered around the globe, you're going to appreciate the new User time zone property of the user profile. Users can now specify the time zone they're working on so that other people can now what to expect when interacting with them.


Users granted the appropriate privilege can now see the current status of an issue in a workflow viewer. Users are now able to quickly and visually identify where an issue is in the workflow.


There are many other improvements available, such as:


Please read the official JIRA Release Notes for further information about this version or download a copy of JIRA and try it now.

Improvements for the Administrators

JIRA v. 4.4 introduces many interesting new features that aim to ease further the administration of JIRA and JIRA projects. The thing I like most is that Atlassian has succeeded in simplifying considerably the administration JIRA interface without losing any of the legendary JIRA configuration flexibility.

I really feel that this new mode, beyond the eye candy of the new windows, provides a feeling of order and clarity that the old administration window was losing over time under the weight of more and more menu items.

This is a groundbreaking feature many, many administrators are going to love. Simply.

Up to JIRA 4.3, administrators had to define workflows on tabular views, defining the states of the finite state machine and the transaction between them. Looking at a workflow was not possible, the only way being using pencil and paper to draw the finite state machine. The configuration was somewhat cumbersome, although quite clear with respect to other implementations I've seen.

With JIRA 4.4, administrators can now define a workflow using a graphical user interface. Drawing the state machine has never been so easy and I expect that workflow implementation and maintenance costs are going to fall heavily with this new tool.

JIRA powerful and flexible configuration features always come with some costs: administrators had to fully understand what JIRA schemes are and how they are supposed to be used. The old JIRA configuration interface was schema-centric and sometimes it could be difficult to easily grasp which scheme was supposed to be changed to apply the desired configuration in a project.

Things have changed with JIRA 4.4. The new JIRA configuration interface is project-centric: it combines the power provided by JIRA schemes with an easy user interface that helps the administrator perform his tasks, guiding him through the various configuration steps, always starting from a project administration window. 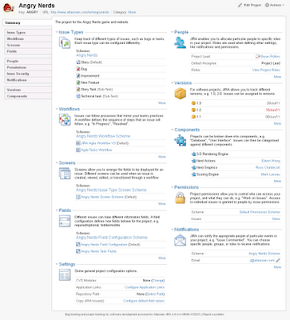 In my opinion, this is one of the biggest JIRA updates in the recent years. If you think that this is just a minor upgrade, I'm sure you'd be surprised to discover that you're wrong: maybe such an upgrade would have deserved a major version upgrade.

Impressions were overall good. I was pleased to discover that I had not to go through diff-ing configuration files to migrate the Tomcat and database configuration from the old to the new JIRA instance: not only the odds of making a mistake are dumped to zero, but the already short time required to update JIRA has been almost zeroed as well.

Both users and admins are going to love the new features introduced with this versions. I sincerely expect that administrators productivity is going to increase, as well as their "disposition" to accept user customization requests for their projects. Customizing JIRA has never been so easy and the new designer brings a totally new way to define new workflows and maintain existing ones.

That's pretty more to it than this, and the best thing you can do is do a JIRA test drive yourself. Here are the complete JIRA 4.4 Release Notes and here's where you can download JIRA and try it yourself.
Posted by Enrico M. Crisostomo at 8/06/2011 01:03:00 PM 2 comments: